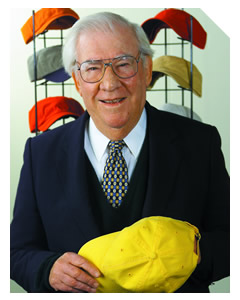 A Pioneer Who Used His Head to Shape an Industry

As an entrepreneur, importer, manufacturer and distributor, Abe Yeddis helped guide the headwear industry through many impressive milestones. But success didn’t spring from good fortune. Rather it came as the result of unusual foresight, a determined spirit and an innovative mind.

His career began in 1935 at the height of the Great Depression when the cap factory in Kansas City where his father was floor manager closed down. The young Yeddis, undaunted by the failure, negotiated a purchase price from the owner and took over the business. With that bold move, Pioneer Cap Company was born.

Yeddis knew to turn things around he would have to develop a new way of doing business. Using his head to stay at the forefront of the industry trends, he began expanding into small town factories across Missouri and Iowa in the late 1940s and 50s. In an unprecedented move, he traveled to Japan and Korea in 1969 to research importing options. Yeddis chose to work in Korea with Young An Headwear, becoming the first major importer of Young An caps in a time that importing from Korea was unheard of. This partnership helped Young An grow to eventually become a 200 million dollar headwear company and kept Yeddis at the forefront of the headwear industry.

Always a teacher and an innovator, Yeddis mentored his grandson Dan Saferstein to grow the business. With his grandfather’s wisdom, Saferstein began to develop partnerships with other suppliers and created the first and only multi-branded distribution source specializing in headwear. Many lifelong achievements were recognized as Yeddis and Saferstein were selected in 2003 to receive the Heart of America Family Business of the Year award in Kansas City, Missouri, where the legacy began.

Yeddis was one of a rare breed of businessmen, cut from the same cloth as other bold and resolute industry pioneers. At the same time, his accomplishments weren't just limited to business. He was very active in the Jewish Community Center, Catholic Youth Organization, Jewish Federation, Big Brothers/Big Sisters, Oakwood Country Club, Temple B-nai Jehudah, and other social, charitable and civic organizations, locally.

At 87, Yeddis still came to the office every day with the same drive and ambition he had in 1935. “Abe is my reason for getting into the headwear business,” said Dan Saferstein, Sportsman Cap Network president and Yeddis’ grandson. “His six decades of experience are my inspiration to continue and lead the Sportsman Cap Network and ensure the future is as bright as the past has been.”